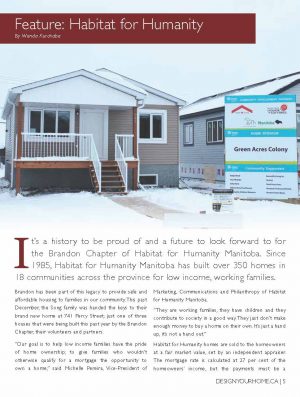 Brandon has been part of this legacy to provide safe and affordable housing to families in our community. This past December, the Song family was handed the keys to their brand new home at 741 Percy Street; just one of three houses that were being built this past year by the Brandon Chapter, their volunteers and partners.

“Our goal is to help low income families have the pride of home ownership; to give families who wouldn’t otherwise qualify for a mortgage the opportunity to own a home,” said Michelle Pereira, Vice-President of Marketing, Communications and Philanthropy of Habitat for Humanity Manitoba.

“They are working families, they have children and they contribute to society in a good way. They just don’t make enough money to buy a home on their own. It’s just a hand up, it’s not a hand out.”

Habitat for Humanity homes are sold to the homeowners at a fair market value, set by an independent appraiser. The mortgage rate is calculated at 27 per cent of the homeowners’ income, but the payments must be a minimum of $550 per month. In addition, homeowners are not required to come up with a down payment and their mortgage is interest free for 15 years.

“One of the biggest misconceptions is that the homeowners get it (the home) for free. The reality is that it is very difficult to become a Habitat partner family as they go through a rigorous process to be selected. They are contributing citizens, they just need a little bit of help to own a home,” said Michelle.

While there is a complete list of criteria that must be met in order to qualify for a Habitat for Humanity home, some of the main requirements for eligibility include: the applicant has to be working for two years full-time or the equivalent of, they must have children, have good credit, and show a need for affordable housing i.e. living  substandard conditions.

This most recent house to be complete in Brandon was a ready-to-move (RTM) home built by Green Acres Colony of Wawanesa. It is 841 square feet with an open concept main living area and two bedrooms on the main floor.

Westman Premier Homes built the foundation and did all the final work on the exterior of the home once the RTM was moved into place. They also did all the finishing work in the basement, which has a spacious and roomy feel with nine foot ceilings. It consists of a large recreation room, one bedroom, a roughed in bathroom, a utility/laundry room and plenty of storage space.

Margaret Schonewille, General Manager of the Brandon Chapter for Habitat for Humanity Manitoba, said that while all of their projects rely on many partners and volunteers, it’s when you see the families all come together to help when you really see the value in what you’re doing.

“Homeowners are required to put in 500 hours of sweat equity or volunteer time, but it almost always ends up being more than that,” said Margaret.

“Their volunteer time can be on their build, on another home or they can even volunteer to work in the ReStore. This family chose to work on their own home, but they also had friends and family who chose to volunteer their time as well. People take a lot of pride in their homes, especially when they’ve been part of the team that helped to complete the project.”

Jibo and Yaping Song, along with their six-year-old daughter and two-year old son, took possession of their new home with much excitement mid-December. While unpacking boxes and getting settled may have been top of mind for this family, there was comfort in knowing that they were moving into a well-built home.

All Habitat for Humanity homes are built with energy efficiency in mind. The intent is to keep energy costs as low as possible and upkeep and maintenance at a minimum. The east end home has an air exchanger, a heat recovery unit, air conditioning and is heated with electric forced air. In fact, the home has one of the smallest furnaces in the industry which runs on only five kilowatts of power versus fifteen. In addition, the home comes with a refrigerator, stove, washing machine and dryer.

The new homeowners also have the added benefit of having custom window blinds (Honeycomb Cellular Shades) on all of the windows donated and installed by Budget Blinds. Owner Sue Swarbrick said while this is the first Habitat house that she was involved with, it won’t be her last.

“It’s been a real learning experience, understanding the whole process and discovering what Habitat for Humanity is all about. It’s a great way to give people a hand up and has been an amazing experience working with such a beautiful family,” said Sue.

In terms of the future, Margaret said the goal for Brandon is to build two homes in 2017, also in the east end of the city. They will be built on the lot by volunteers and professional tradespeople.

“We’ll build them right on site and provide our volunteers with the tools that they need to lend a hand. And, if they don’t have experience in the construction or carpentry industry we work with our volunteers to teach them the skills to build the home so that we can all successfully complete the project,” said Margaret.

Habitat for Humanity Manitoba only builds as many houses as they fundraise for. They need to raise $175,000 just to build one home, which doesn’t include the land. While the fundraising goals may seem lofty, the return on investment for the entire community is well worth it.

“There’s a social return in which studies have shown that when families own their own homes they aren’t going to the food banks, they are healthier and not using the healthcare system as much and they become taxpayers. When we build a house, we’re also contributing to the local economy. We buy all the supplies locally and any money raised stays within that community. It’s reinvested to build more homes and help more families to improve their lives,” said Michelle. 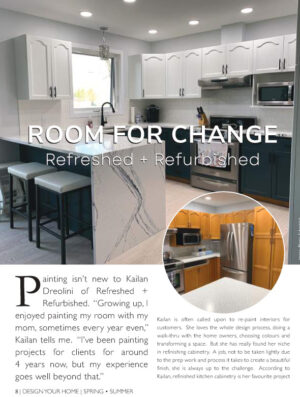 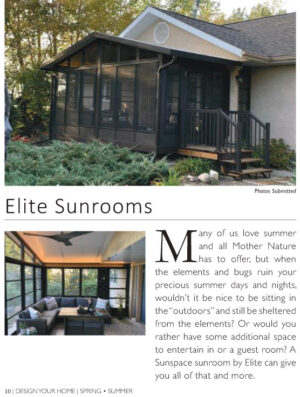